Let me set the scene for you…
My husband and I are standing in the lumber section of Lowe’s picking up some lumber so my husband can make my daughter a new bed. My 18 month old in my arms, suddenly throws her head down into my chest…and I kid you not…says “nom nom nom!!!”
I thought I was going to die right then and there. I looked at my husband in disbelief, and he was also doing everything he could not to laugh.

Breastfeeding an 18 month old REALLY isn’t as bad as most people would think. With the occasional embarrassment aside of course. My goal was only ever to make it to a year and believe me, if it weren’t for the support of my husband and my own mom, I may not have made it. Not because it was hard, ((I hear soooooo many moms complaining about how hard breastfeeding is)) but because I had some really negative people around me. Promising me I would never make it to a year. But a year came and went and here we are. Still going strong, still pumping at work, and still breastfeeding on demand when I’m not working

There have been only a handful of occasions in which I had to breastfeed in public. Usually at places like the zoo or the aquarium. Places we end up spending long periods of time. If we are out and about shopping or at the grocery store, I just tell her she has to wait. And when we leave I climb in the backseat with her, lock the doors, and nurse her to her little hearts content.

It only gets easier to breastfeed as they get older. They understand no and wait. They can actually tell you when they want milk rather than just screaming and crying until they’re all sweaty and red and you have to leave your cart full of groceries in the middle of the isle and hustle out to your car before the little screams shatter you.

She nurses so less frequently now. Just a few times a day ((and night still)). Before her nap, before bed, and usually one other time during the day. Usually late afternoon between nap and dinner.

Nursing is so much more fun when they’re older too. We cuddle and watch a movie, she sticks fingers in my nose and laughs at me, we even snuggle up and read while she nurses. I’m telling you, this is the best! For a mom to a little girl who doesn’t slow down for ANYTHING, I cherish those moments when we snuggle up and share that time together. It is such a special time.

BUT she’s older now and understanding so much. So it has to raise the question…Should I wean her? We recently had her 18 month wellness visit and the doctor asked me if I felt like I needed to wean her, or if we were all still doing okay with the way things were going. I really hadn’t even thought about it until then, so her question caught me a bit off guard. After we left I really started to put some thought into and what that would mean for my family. First and foremost I thought it meant sleep. Finally some sweet sweet sleep. But there’s no guarantee that weaning her could cause her to start sleeping through the night. She could be waking up for any number of reasons.

Which leads me to the first reason in which I decided it’s not time yet. My daughter is teething. And teething has been such an incredibly rough journey. At 18 months, she still only has 6 teeth. And she didn’t get those teeth until she was 15 months old. Breast milk helps with the pain of teething, AND it comforts her. When she wakes in the middle of the night in pain, drooling buckets, and upset, why wouldn’t I use something so natural and God given as breast milk to make her feel better. It just feels mean to take that away from her now. And for what reason? Her nursing isn’t upsetting my life in any way. My sleep maybe, but sometimes as mothers we make sacrifices. Bottom line.

My next thought was, how’s she going to feel? She’s not quite yet old enough to understand if I were to attempt to explain to her that she’s a big girl now and she doesn’t need it, but she can have a drink of water instead. And here I am, for the last year and half letting her have milk anytime she wants, and then I just suddenly tell her no? That’s confusing.

I also had to really think about whether or not I was ready for weaning. I know it seems silly but..we have had this relationship day in and day out for 18 solid months. She’s already talking, running, climbing, and sitting on the potty. Was I really ready in my heart to let this go and force her to grow up a little more? The answer here is no. A hard no. I’m not ready to let her go. She’s my only baby and they grow so unbelievably fast. They’re this tiny warm little bundle being placed in your arms and then you blink and they’re toddlers. Running around the house, getting into ANYTHING AND EVERYTHING, watching and imitating your every move, talking, telling you no…having opinions about things. And all you can think is….how did this happen?! Where is that tiny little squeaky thing that loved to snuggle on your chest? So in the end, I went with Let Them Be Little. Because the truth of the matter is they’re only little for a little bit of time. And I am so enjoying every second I spend with her. 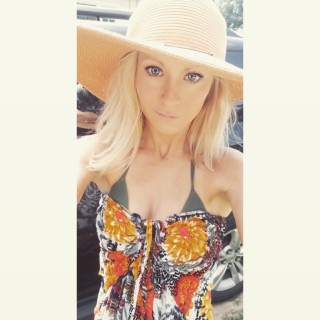 I'm a first time mom who's completely unapologetically unconventional. I drink my wine with no regrets, craft all day *until the baby wakes up from her nap*, caffeinate like a college kid on finals week, and live my days (and nights) for my little family.